When I was looking through my two Primrose Bakery cookbooks and planning what to bake next, I was spoilt for choice! Lots of delicious mouthwatering cupcakes with different tastes and colours, also different flavours some more unusual than others.

Then, one evening about 2 weeks ago my choice was made for me. A customer asked me if I made peanut butter cupcakes.  Up til then I hadn’t, to be honest it was something I had never got round to trying out due to being too busy.  I’m so glad I did and the customer loved them.  In the first book “Cupcakes From The Primrose Bakery” is a recipe for peanut butter cupcakes and topped with a milk chocolate icing.  I looked through the recipe, looked at the picture and thought that it looked straightforward.

I like to make my own twists to recipes, to call them my own and I like to decorate my cupcakes differently. This wasn’t difficult with the peanut butter cupcakes as the picture in the book showed the cupcakes decorated with peanut butter chips.  I have never ever seen them in the UK, they must be American.  The nearest thing I had used to that was some butterscotch chips I had brought back from a trip to the US about 3 years ago.  I sourced some Reeses Peanut Butter Drops (like M&M’s) but I had a crap day and delved into them when I had a chocolate craving. After that I felt really sick and thought well if I felt sick I don’t want my customers to!   I then had an idea that I could top the cupcakes with peanut M&M’s.  At the moment, what with the Diamond Jubilee and the Olympics there’s some bags of red, white and blue ones floating about so they were perfect.  If I have to make them again in the future I’ll use the standard ones or the other limited edition ones.

So, read on to find out how I made them:

The notes in the recipe state that the cupcake is fairly rich and dense, I would agree with that, but I was assured they were moreish!

I mixed the cupcake batter using the creaming method in my KitchenAid mixer.  First I creamed the butter, peanut butter and the sugar together, then added the eggs carefully along with a spoonful of vanilla extract.  The dry ingredients were combined separately, then added slowly to the mixture.

To note: It states in the recipe to use smooth peanut butter.  Personally I don’t like the cheaper brands of peanut butter as they are full of added sugar which to my mind is totally unnessecary! I prefer spending a little bit more and buying a nicer brand, such as Whole Earth. Their peanut butter contains oil, but no sugar.

When it was time to spoon the batter into the cupcake cases I realised I had some American themed cupcake cases left over from a 4th July order beforehand.  As these cupcakes were American in style I chose to bake them in the remaining cases I had left. Usually the Yorkshire Bakery cupcakes are baked in whatever cupcake cases I have left in stock that co-ordinates well with the cakes. 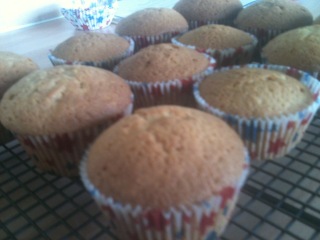 Here are the cupcakes cooling on the rack. I found that they rose very well and smelled delicious when they came out of the oven.  My daughter, who loves peanut butter on toast sometimes for breakfast was very impressed with the smell. She was also worried I’d nicked her peanut butter for the following morning!

After a couple of hours cooling time it was time to make the accompanying icing.  The Primrose Bakery suggest using Milk Chocolate Icing as an accompaniment.  I had never made chocolate icing with milk chocolate before, probably because I was worried it would not melt as well as plain chocolate.  I decided to try it as a half and half.  I also found that this recipe did not need icing sugar but used double cream and butter as well as vanilla extract.  I looked in the fridge and realised I did not have any double cream left, so back to the drawing board it was.  In the end I chose to use the recipe I usually use on my luxury chocolate cupcakes and I’m glad I did as the icing came out exactly as I wanted it to.

Here are the finished Peanut Butter Cupcakes topped with the luxury chocolate icing and with the red, white and blue peanut M&M’s for decoration.

If you want to bake these for yourself you will find the peanut butter cupcake recipe on p72 in Cupcakes From The Primrose Bakery.