Just before Easter I finally managed to get round to using my Nordicware Elegant Party Bundt pan. Easter was weeks ago but my blogging has gone by the wayside.  Life has just been too hectic recently.  The Elegant Party pan was a Christmas present and I’d wanted to use it for a while. What better than to bake a mouthwatering chocolate cake in it and decorate it with any Easter chocolates and mini eggs I had to hand?

As mentioned in my previous post, I had a bit of a fiasco with my turn doing supper for my local WI meeting.  Luckily three ladies took the three cakes off my hands for me and paid me to cover the cost of the ingredients.  I was so grateful, after all I had spent a lot on extra chocolate to give this cake the wow factor! 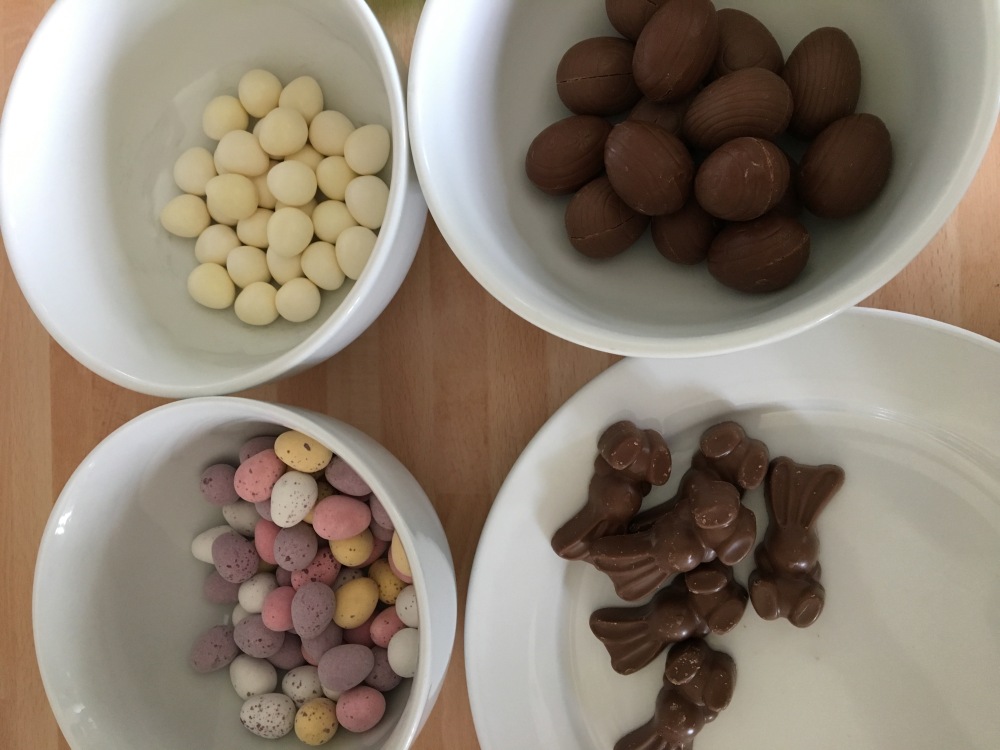 To bake the actual chocolate bundt itself I started off by greasing the pan with some trusty Wilton Cake Release.  I made sure it went into all the nooks and crannies of the pan so the cake would slide out easily and the pattern would stay intact.  Once this was done, I preheated my oven to 160oC (it’s a fan oven).

Then to start on the cake. I melted some dark chocolate in the microwave carefully then left it to cool down but not to set.  As this was happening I creamed together some soft unsalted butter and some golden caster sugar.  Once this was soft and fluffy I then added in some eggs one at a time.  In between adding the eggs I also added a tablespoonful of self raising flour from the flour already weighed out to mix in.  This prevented the mixture from becoming curdled.  The rest of the flour along with some baking powder was folded in afterwards.  In a third bowl along with the cooled down melted chocolate I also had some natural yoghurt and some vanilla extract mixed up.  To combine all the ingredients I put in about a third of the flour mixture, then folded it in and then repeated that with the chocolate mixture.  I did this again twice more so all the ingredients were combined.

The mixture was then carefully spooned into the pan and went straight into the oven.  Luckily the base of the Elegant Party pan is quite stable so I didn’t need a baking tray underneath to stop it tipping all over the floor of my oven.

After about an hour’s baking time the bundt was ready to come out of the oven.  At home by this time it was lunchtime and the smell was making me desperate to eat something.  I was so tempted to raid the chocolate stash and unfortunately the temptation was too great.  A mini creme egg slipped into my mouth, closely followed by about four min Milky Bar eggs.  The embarrassment of not having enough chocolate to decorate the cake was enough to stop me working my way through the rest of them, though!

Then to the moment of reckoning- the dreaded will the bundt come out of the pan in one piece moment? All cake bakers feel like this! But I usually find its typical when a cake has to look perfect, it doesn’t come out in one piece and most of it sticks to the bottom.  And when you don’t have to worry about a perfect cake, it slides out immaculately.  Thankfully I knew that any mistakes could be covered up with chocolate ganache on this cake.

Out if slid in one piece! Yayyyy! I left it to completely cool and went off to get some lunch for myself and my two teenagers.  Only both of them at lunchtime had only just got out of bed and had just eaten breakfast.  This means that at 3.00pm when I’m slap bang in the middle of something they’ll saunter into the kitchen to see whats for lunch and wonder why I can’t drop everything and cook something.  Or they’ll start making something themselves taking up space and making my cake baking space in a mess. So I ended up with beans on toast just for myself.

After the cake had cooled down it was time to add a chocolate ganache to the cake.  This was made by melting three bars of dark chocolate in the microwave and then pouring some double cream over the top of it. This made a beautifully runny and smooth icing.  To get the ganache into the grooves of the bundt cake I got a disposable piping bag and snipped off a tiny corner of the tip. The ganache was poured into the bag and piped over the top of the bundt, coaxing the drips so they went down in between the grooves. 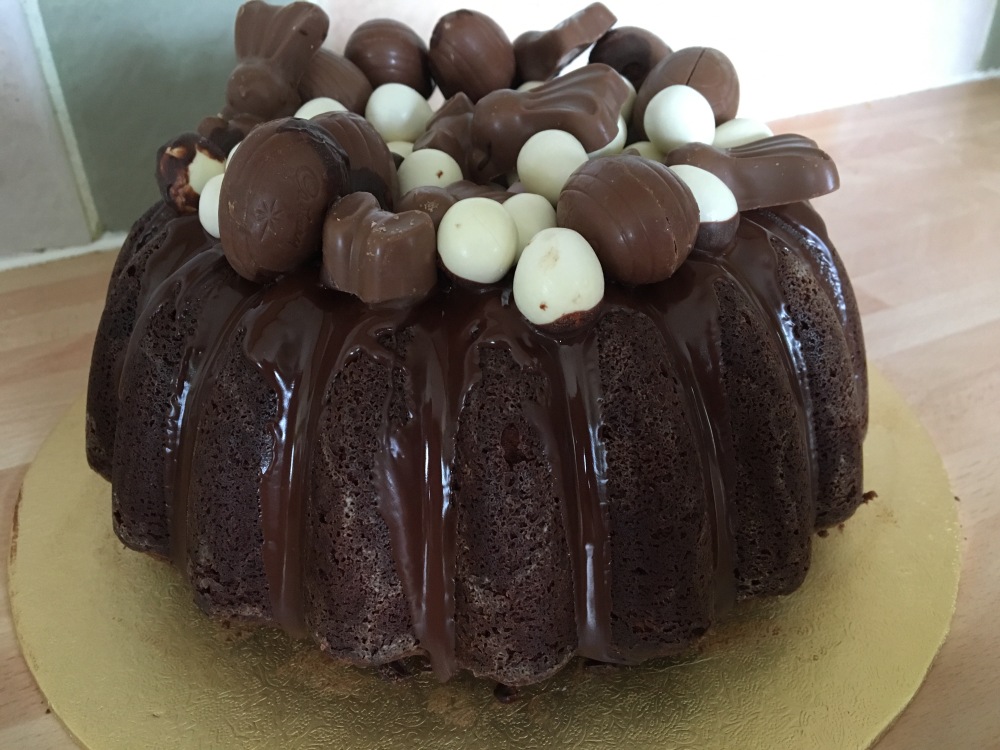 As it was nearly Easter and I needed all those Easter treats using up without me gobbling them, I went completely over the top.  Starting off with Cadbury’s Mini Eggs, I filled the middle of the bundt until the eggs reached the top. Then on top I stuck Malteser bunnies, Galaxy mini eggs, Oreo mini eggs, Milky Bar mini eggs and mini Creme Eggs. Definitely not a cake to eat if you are on a diet.  But the original idea was that each person would have a tiny sliver with a couple of mini eggs. 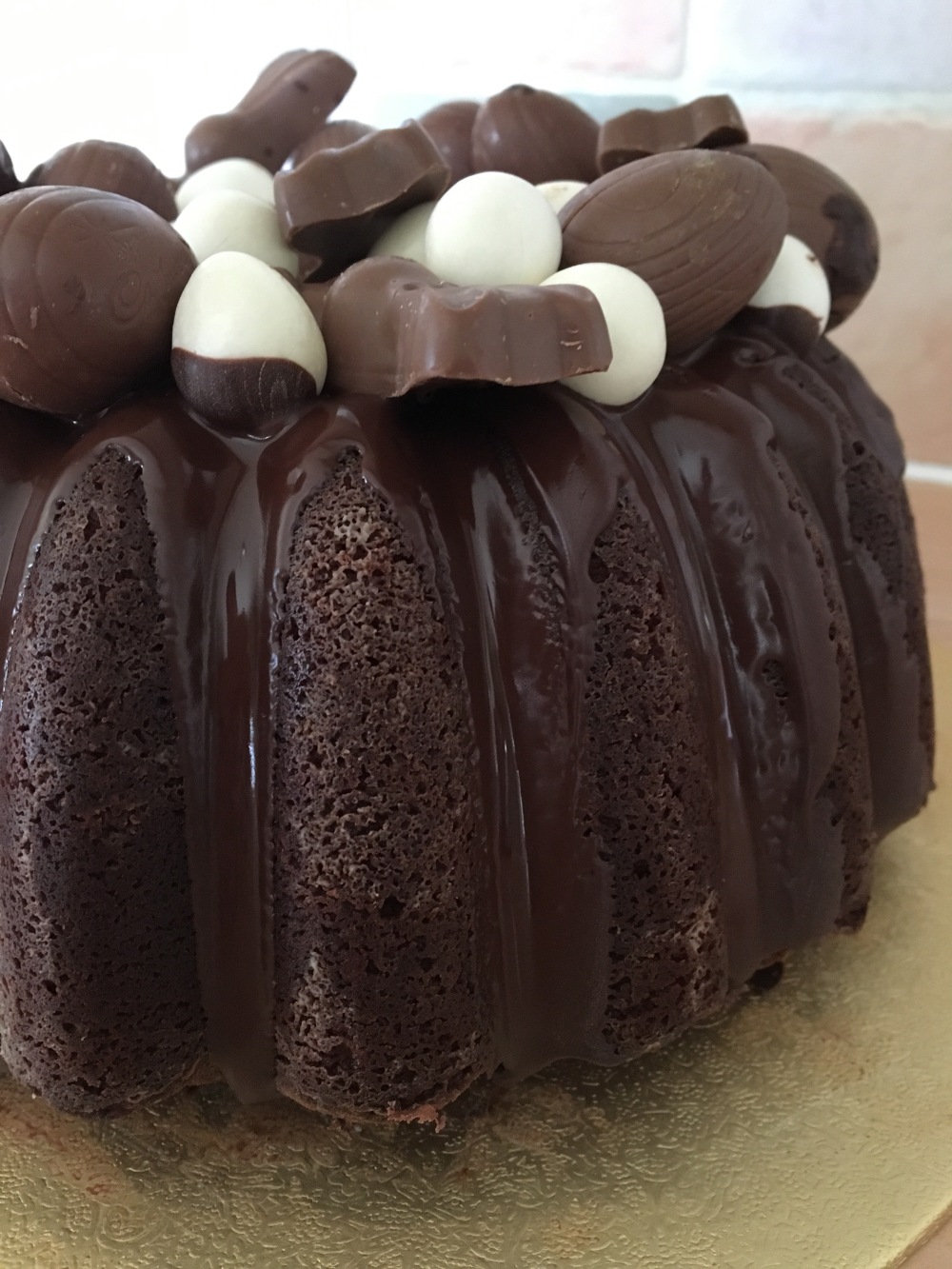 This chocolate bundt could be adapted for any occasion where you need a chocolate cake. You could use anyone’s favourite sweets or chocolates to decorate it.  It can be for a birthday or even for Christmas if you fancy something like this instead of a traditional fruit cake.