I’m a huge fan of Nordicware Bundt pans much to the annoyance of Mr SmartCookieSam and my kids.  I’ve lost count of how many pans I’ve got since I started collecting them seven years ago.  My first one was the giant cupcake pan and since then I’ve been lucky enough to find ones in local shops, chain stores, Ebay, Amazon and even over in Canada in Williams Sonoma.  I spend birthday and Christmas money on them. Even only a few days ago as I type I managed to buy the Blossom pan. It turned up when Mr SmartCookieSam was there and he said “But you’ve got already got that one!” Er no, but then I suppose they all look the same to him.

The other week I managed to find the Star Pan (pictured below with the Heritage pan and the Elegant Party pan) in my local Home Sense.  I’d only gone in to find a blanket for my dog to lie on when he goes in my car.  Thankfully he did get his beautiful tartan blanket but I also came out with a bundt pan!  I wasn’t expecting that!

Fast forward to a month later and I had the perfect chance to use my star pan for the first time.  In my previous two posts about the Pinata Cake and the Decadent Chocolate Bundt Cake I mentioned about my wasted day baking three sumptuous cakes for my local WI Supper, only for there to be a mix up on the rota.  The third and final cake I chose to bake was one that always goes down really well at WI is my Lemon Drizzle Bundt.

By this time it was early afternoon and I had already baked two cakes and decorated one of them. I had yet to decorate the second and to bake this one.  Fortunately lemon drizzle cake doesn’t need any icing on it, just the syrup and a dusting of icing sugar.  At least time was on my side.

I greased the Star Bundt pan with Wilton Cake Release, preheated the oven to 160oC and then started to weigh out the ingredients.  I beat together butter and caster sugar until it was light and fluffy and then added in four eggs one by one.  When the eggs were beaten in, I also added a tablespoonful of self raising flour from the whole amount each time to prevent any curdling.  In another bowl I grated the zest from two large lemons and also added the juice from one of them in with some natural yoghurt.  This was mixed together.

To bring the mixture together I alternated spoonfuls of the remaining flour along with the lemony yoghurt mixure.  This was carefully folded in so I didn’t see any flour not mixed in.  Then the mixture was ready to go into the tin and into the oven.

After about 40 minutes I checked the cake and noticed it was still a little bit runny in the middle.  I kept this cooking for another ten minutes or so and that did the trick.  The cake came out of the oven and was ready to cool down.

While the cake was cooling I had to make the lemon sugar syrup.  This was made with caster sugar, lemon zest and lemon juice gently heated up in a saucepan until the sugar had dissolved.

It needed to cool a little bit for a few minutes but the cake needed to still be warm for the syrup to soak into the sponge.  I did this as the cake was still cooling in the tin.

When the cake was ready to come out I felt as anxious as I always do every time I take a bundt cake out of it’s pan.  This one would have to look good as it wasn’t going to be heavily decorated and any chunks missing from still being stuck in the tin would be on show!

Fortunately, thanks to taking great care with greasing the pans carefully I didn’t have any problems.  So all that remained was to let the cake cool down on a cake board and to dust it with icing sugar. 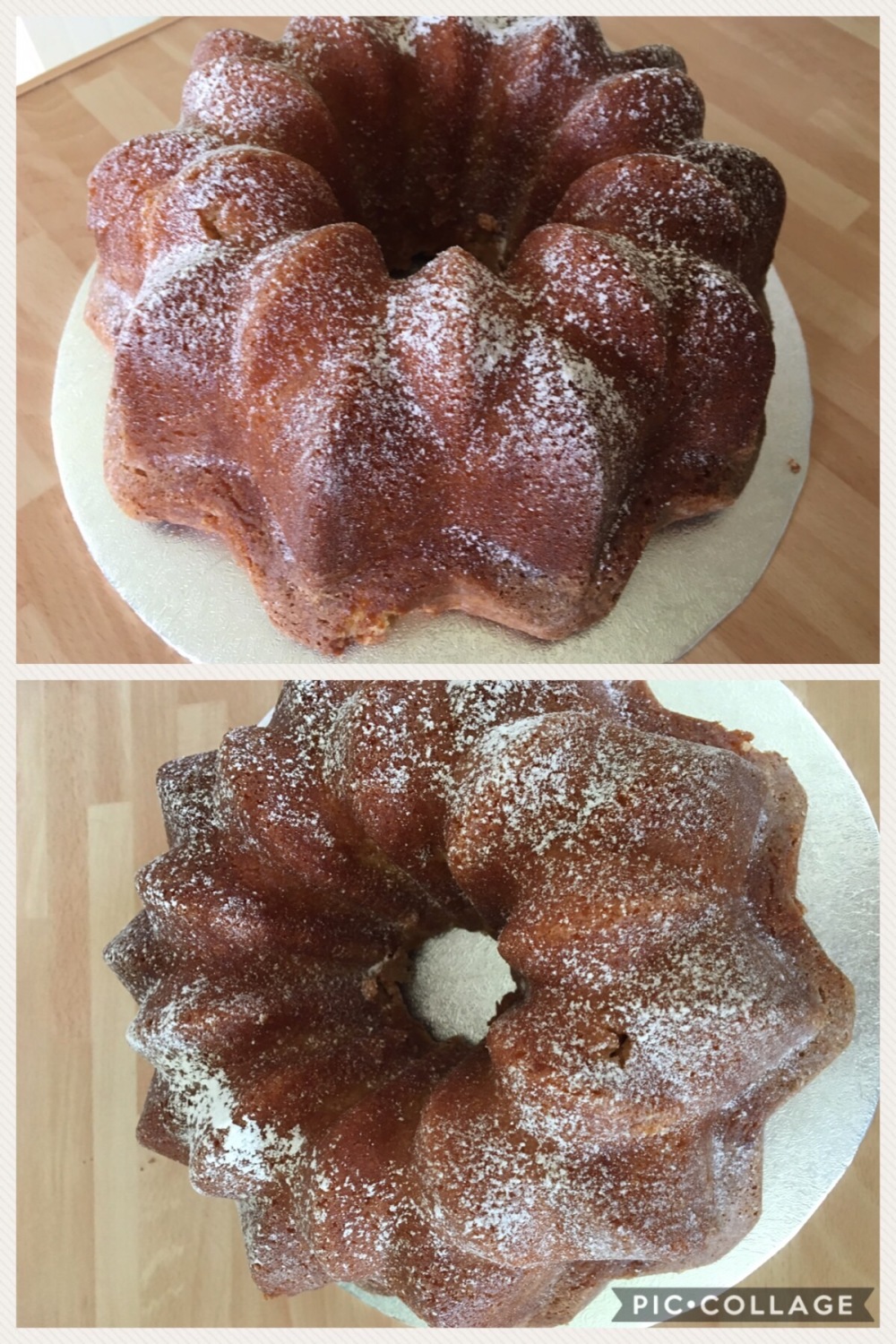