It’s been an absolute age since I’ve last blogged.  The intention has been there! In fact there are eight posts in draft form but I’ve decided to sideline them for now and do them later when I have more time.  I realised it was six months since my last post! SIX MONTHS? How did that happen?

Why the absence?  I bet you all hadn’t really noticed or missed my little blog.  I know my little blog is a tiny one but I get enormous pleasure out of creating it and sharing recipes.  My son has been creating a few baking videos with me so hopefully I’ll be able to share them on here as well.

To be honest, it’s been absolutely crazy in SmartCookieSam world recently.  I’ve been concentrating on my day job, trying to cope with all life has thrown at me and blogging has just drifted further down the to-do list! I’ve been away as well, including a trip to Canada to visit my family.  This was the inspiration behind this bake.

My favourite recipe book of all time is Nigella Lawson’s How To Be A Domestic Goddess. As mentioned before in previous posts, Nigella and her book helped me through a difficult time in my life.  I had always wanted to try her Baby Bundts recipe which Nigella said had been inspired by a trip to New York where she “ate a little yoghurty lemony ring moulded cake and wanted to whip up something similar immediately on my return”  For this recipe you need a six hole mini Bundtlette pan, which I didn’t have.

Those of you who follow me on Twitter and Instagram will know that I have a Nordicware Bundt pan obsession and collect them.  I think they’re such pretty designs, well made and will last a lifetime.  So when I go over to Canada, I always go on a shopping trip to West Edmonton Mall where there is a fabulous Williams Sonoma.Williams Sonoma.  I’m always in Bundt heaven when I go there!  I only had room in my suitcase for two pans.  One just had to be a mini bundlette pan so I could bake Nigella’s recipe and the other was a loaf pan.  More of that in another post.

Back home in the UK and still recovering from jet lag a few days later, I decided to have a go at the Baby Bundts.  For copyright purposes, I cannot share the recipe here but I can explain how I made it.In a jug I first measured out and mixed together natural yoghurt, melted butter, free range eggs and some lemon zest.  Next I put all the dry ingredients into a bowl, which were plain flour, bicarbonate of soda, salt and some caster sugar.  These were then mixed together carefully before combining the wet and the dry ingredients.

To prepare the Bundt pans I always swear by Wilton Cake Release, which I buy in the UK from shops like Lakeland and Hobbycraft.  I know other bundt bakers might use a special spray bought online or some may use butter and flour to grease their pans.  On the whole Cake Release works well for me but I take great care to grease in all the nooks and crannies of the pan so that the cakes just slide out.  Sometimes I do have disasters, though and feel like giving up.

When the mixture was ready and the mini bundtlette pan greased, I filled each hole carefully.  The mixture filled about two thirds of the pan.  I baked them in my fan oven for about 25 minutes on about 160oC.

After the cakes were cooling for about 15 minutes, I managed to get them out of the pan in one piece.  In fact they just slid straight out.  I left them to continue cooling on the rack and went off out to walk the dog.  When I came back, it was time to make the icing.

The icing is just a simple lemon glace icing made with icing sugar and lemon juice made to a semi running consistency.  I wanted it to run to drizzle down the side but wanted it to be thick enough so that you couldn’t see the cake underneath.

Even thought the cakes are meant to be individual ones, they do come out quite big and are larger than cupcakes.  I ended up taking them to work and I cut each one in half so there were twelve portions.  I left them on the table in the staff room on the morning and I was pleased to say they had all gone by lunchtime. 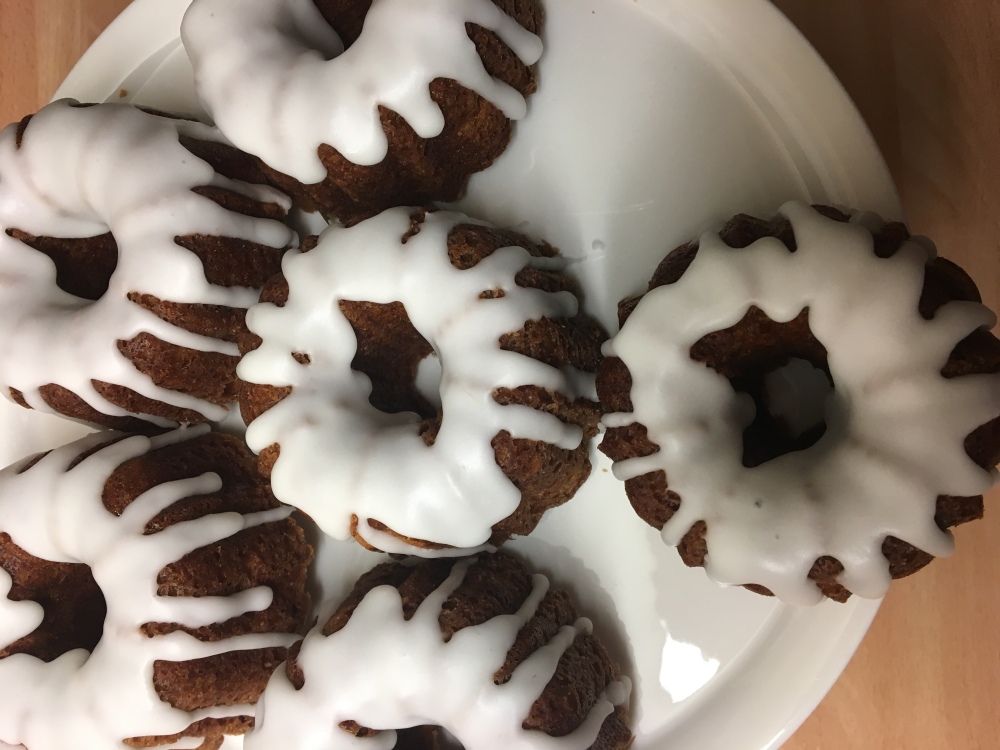