Although I love baking and people say I’m good at it, the same can’t be said about my breadmaking and patisserie skills.  It’s only because I’ve not had enough practice or also that I don’t have enough knowledge.  Next year I hope to go on a couple of courses but in the meantime I’m going to practise at home.  It’s as if any recipe contains yeast, it suddenly pushes me into panic mode!  But surely if I followed the recipe to the letter like I do with cake and biscuit recipes?

Cue the reasoning for my second bake from The Great British Bake Off Christmas book.  I saw the photo which accompanied the recipe for the Cinnamon and Raspberry Whirl Wreath and my mouth started to water.  It looked like a giant Danish pastry.  As the recipe introduction says, it’s a “delicious wreath made from a sweet, enriched dough coated in fruity jam.”  Not only that but the dough is infused with cardamom and the raspberry filling is accompanied with the tantalising aroma of cinnamon sugar.  I couldn’t wait to try it out.

When the milk had cooled sufficiently, I made a well in the centre of the bowl containing the flour and salt.  I then poured the milk mixture into the well and then formed a dough.  I had to add a little  more flour so that the dough was easy enough to knead.

After kneading for 10 minutes I put the dough into a bowl and covered it with a teatowel. I usually put bread to rise in my utility room on the work top as it was warm in there.  I left it there for about an hour or so.

After the dough had proved for about an hour I knocked it back and then turned it our onto the work top.  I had to roll the dough into a rectangle which was easier said than done!  It was the most  wonky rectangle I’d ever seen though.

The next bit was extremely fiddly.  I had to roll up the dough like I was making a Swiss Roll.  It had to be a very tight roll but that was easier said than done.  Once it was rolled up I then had to cut the roll in half lengthways so that the raspberry jam layers were easy to see. Unfortunately because of the red colour it looked more like a nasty wound or something my daughter might have created on her make up and special effects course! I twisted the dough round to form a wreath but it ended up more like a swirly lump with hardly any gaps in the middle like a wreath should have.

Back into the utility room it went, once again under a teatowel but this time on a baking tray.  Another hour of proving and then the wreath had doubled again in size and was now ready to be baked.  The wreath went into the oven while Mr SmartCookieSam and I were eating dinner and came out of the oven just before I went to pick my son up from work.  The gap in the middle of the wreath had closed up even more and it looked a lot messier than the picture in the book.  The thing was, did it taste good?  I couldn’t wait to try some.  As I’m typing this, it’s 10pm and I can still smell the cinnamony aroma wafting through from the kitchen.  Guess what I’ll be eating for breakfast tomorrow, then! 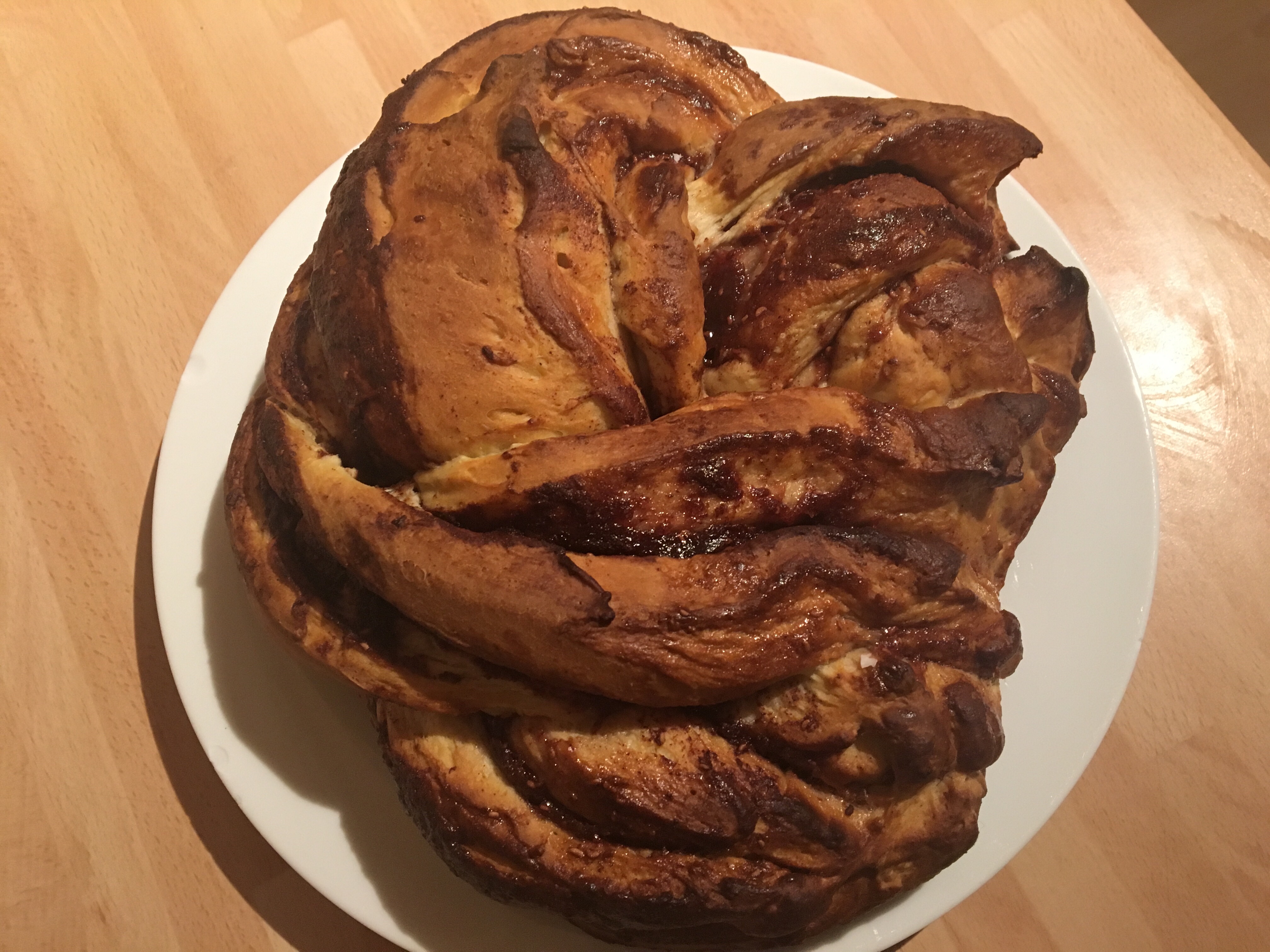